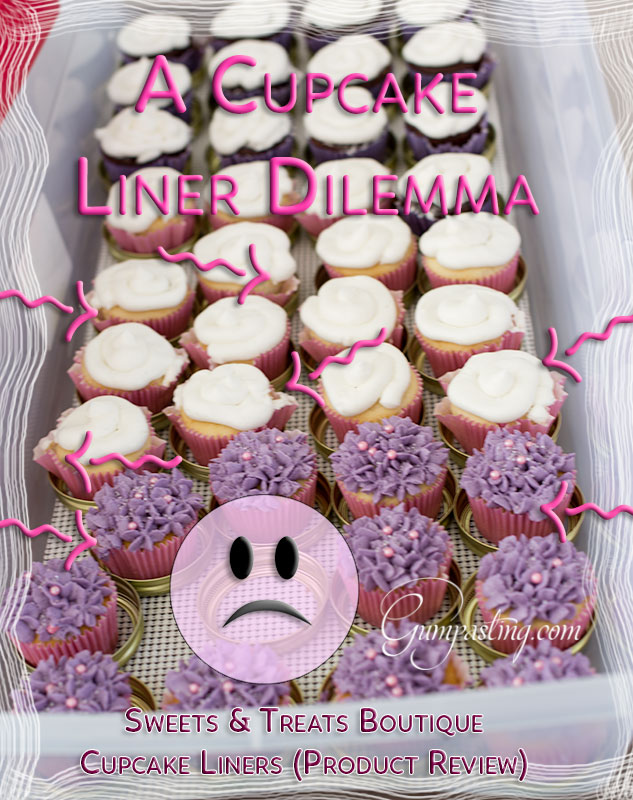 I debated writing this review about these pretty oil-proof cupcake liners from Sweets & Treats Boutique because it really isn’t a gumpasting product per se. However, I felt obligated since I mentioned liking them in an earlier article: How to Make Pretty Purple Cupcakes.

My daughter wanted cupcakes for her daughter’s 1st birthday both for the cake table and for a DIY Cupcake Station. So, having previously used the liners and being happy with them, I placed an order for some Solid-Light Purple liners for my chocolate cupcakes and some Solid Light Pink liners for my vanilla cupcakes as well as few other liners for other occasions.

Unlike my earlier experience, this time was completely different. Yes, they still did not lose their vibrant coloring after baking, but this time many of the liners separated in varying amounts from the cupcake itself after being baked and left overnight (see the above photo). Normally I try to take a lot more photographs of anything I plan to write about, but I was pretty anxious at this point, but please trust me when I say it was not a pretty sight. As a matter fact, three of the cupcakes were almost sans their liner :C. And, in case you were wondering, I did use the exact same recipe and baking procedure I had when using the Sweets & Treats Boutique’s pretty purple and white liners (mentioned in my earlier article) all of which remained perfectly intact.

Since my discovery was on the morning of my granddaughter’s party I obviously couldn’t make more. Ultimately I tried to save them by adding additional frosting around their outermost edges to try and disguise this separation. Then in absolute desperation I even tried piping some icing into the gaps themselves hoping it would sort of glue everything together. All that did was make things even worse, i.e. a sticky mess. Okay, I know some of you are thinking what on earth was she thinking? But remember, I'm a proud Nana and I wanted everything to be just right for this special occasion. Needless to say, I was very unhappy because instead of producing the lovely cupcakes I had made for my granddaughter’s “Hello” party earlier in the year, this time around I was having a baker’s worse nightmare!

I ended up contacting Sweets & Treats Boutique hoping they would have a reasonable solution or at least maybe give me an explanation for this occurrence. After all, it is an ingenious baking solution and is really great product when it works. However, I did not hear back from them. That led me to do a web search about their liners and found that they are also selling their liners on Amazon. After reading many of the Amazon reviews I found out that I was not alone in this dilemma because quite a few other customers are having this very same issue of their cupcakes “pulling away” from their liners.

What a total bummer because I really wanted to root for this company. However, I wish I had seen these Amazon reviews before I had placed another order because as much as I love their liners ability to maintain their unbaked coloring it is far more important to me that they remain attached to the cupcake.

To avoid another cupcake catastrophe I’m now hesitant (okay extremely reluctant) to use any of my remaining cheerful cupcake liners. Hopefully in the future I will be able to do some sort of fun arts & crafts project with them when my granddaughter gets older. Now that would be turning lemons into lemonade.

FYI: If I should hear back from Sweets & Treats Boutique I will give you an update.