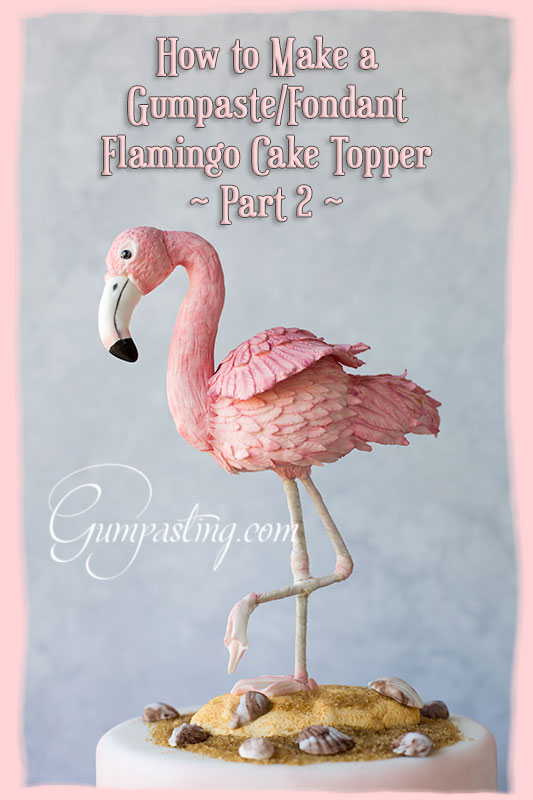 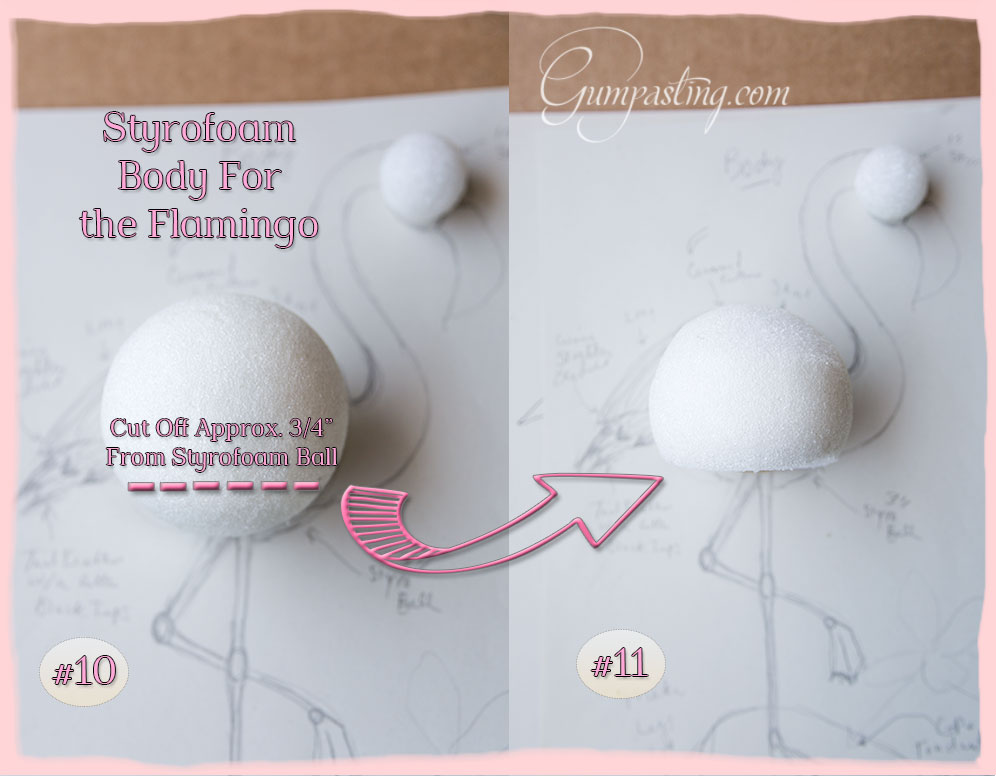 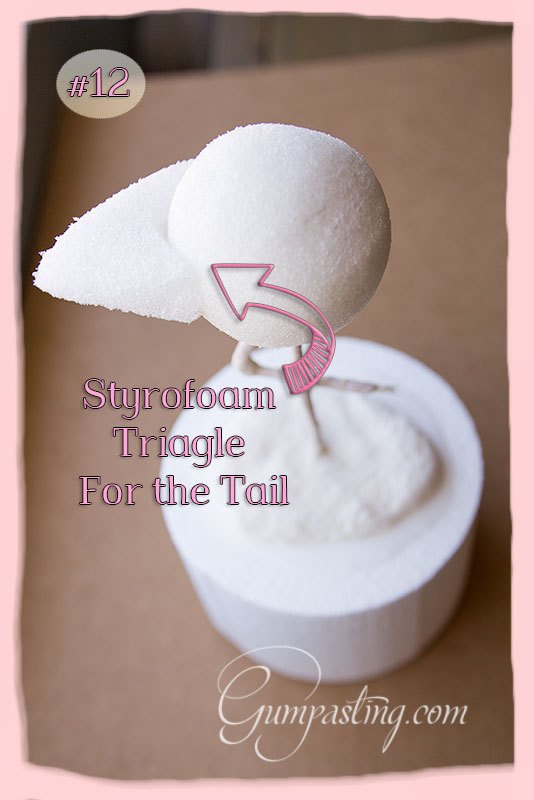 I continued on by covering the bottom (the “base”) of the body and the tail with a thin layer of Crisco. I constructed a teardrop-shaped pattern piece of modeling paste (picture #13) making it a little bigger than the body and tail base so that the edges would extend slightly above the lower lip after I attached it to the base. Optional step: Use the Kemper wire tool to create little marks to resemble downy feathers (picture #14). They might not show, but I still like adding this finishing touch. After I allowed it to dry, I dusted it with the pink petal dust mixture.

At this point I decided it needed a little something extra where the legs meet the body, so I added a little more modeling paste to resemble some short body feathers (picture #15). I used a Dresden tool to make the markings in the paste.

I used some gumpaste to create the long, slender neck piece using my line drawing as a guide to create the correct curve. I inserted toothpicks with glue on them into both ends and planned to let the glue dry overnight. Fortunately before it had dried completely I had a change of plans because I determined that the toothpick for the body was probably not going to be strong enough to do the job (sigh).  So to be on the safe side, I replaced it with a BBQ skewer instead, of course gluing it in and letting it dry. (You will see this substitution in picture #22.)

I then glued the 1” Styrofoam ball onto the neck (picture #16) and let it dry. I glued the beak’s toothpick into the Styrofoam head again using my line drawing as a guide for placement (pictures #17 & #18).

I covered the head with Crisco and used my tissue paper head pattern to cut out a layer of SK Modelling Paste (picture #19). While it was still fresh I smoothed the paste onto the head and around the beak. I used a ball tool to create the two eye sockets (picture #20).and let it dry. The head pattern did not fit on the Styrofoam perfectly, but it did make it quite a bit easier than trying to add just a freeform piece of paste.

After the head was dry I covered the neck with edible glue and a piece of modeling paste I cut using the tissue pattern piece I had made (picture #21). It did not fit perfectly, so I had to cut s off some of the excess paste to make it cover nicely. Since I didn’t take photos of how I molded the modeling paste around the neck I have decided to use my pattern piece as an example (picture #22). I next used the Dresden tool to make lots of small lines to replicate its neck feathers (picture #23).

It was now time to color the head and neck. So the white portion of the beak wouldn’t get any of the residual pink dust on it and possibly smearing the black tip I covered it with plastic wrap as a precautionary measure (picture #24). FYI: the plastic wrapped beak also made a great handle to hold while dusting it.

To set the petal dust I steamed it (picture #25). To ensure that the steamed dust would not rub off I let it dry thoroughly before touching it. Should you miss any spots when petal dusting this would be the time to touch it up and re-steam it.

It was now time to glue the head/neck piece onto the body.