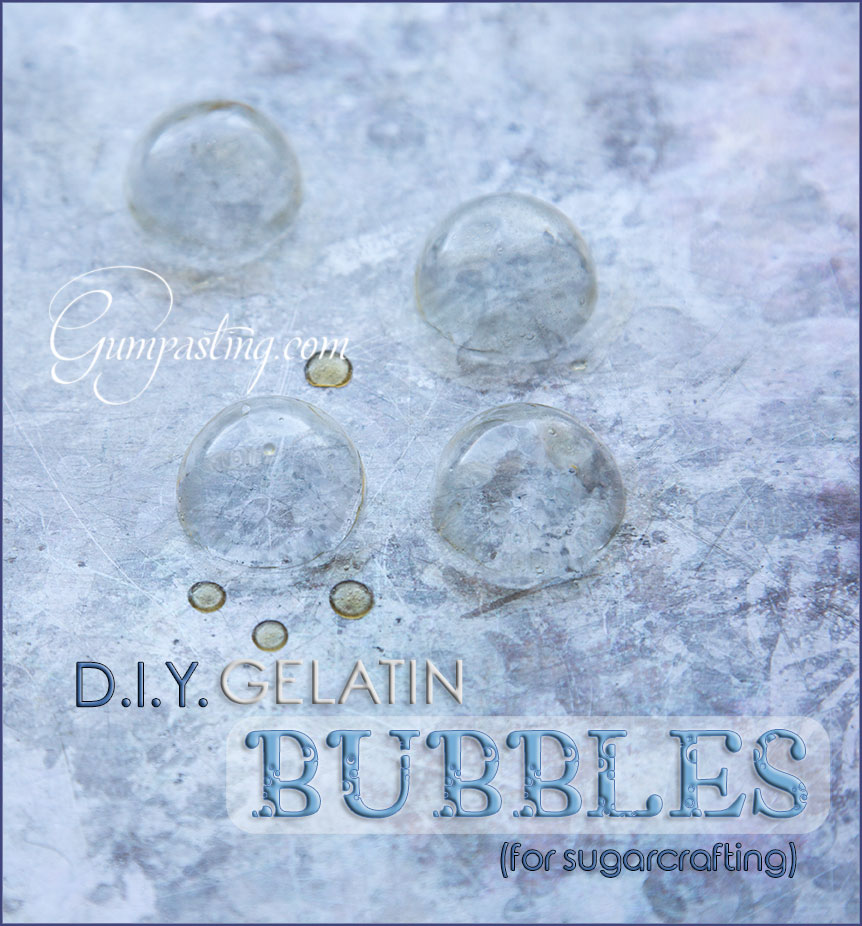 I needed a bubble for an ocean shoreline for an upcoming project. Actually, just half of a bubble floating on top of some sand. I had no idea how to make it so I looked on the Internet and found that there are several websites that deal with how to make a ‘whole’ round bubble. In them they use a balloon to form these globes. However, since there are no such thing as 1” balloons (the size I was planning to make), I was totally out of luck. That is when I realized that I was going to have to devise my own method to create these tiny ‘half’ bubble shapes.

By the way, this is not the first time I’ve used liquefied gelatin in a project. I used it before to create my dragonfly and bumble bee wings. If you would like to learn more about using gelatin for sugarcrafting see: Gumpasting Tips for Dragon Wing. Here is how I made the bubbles: 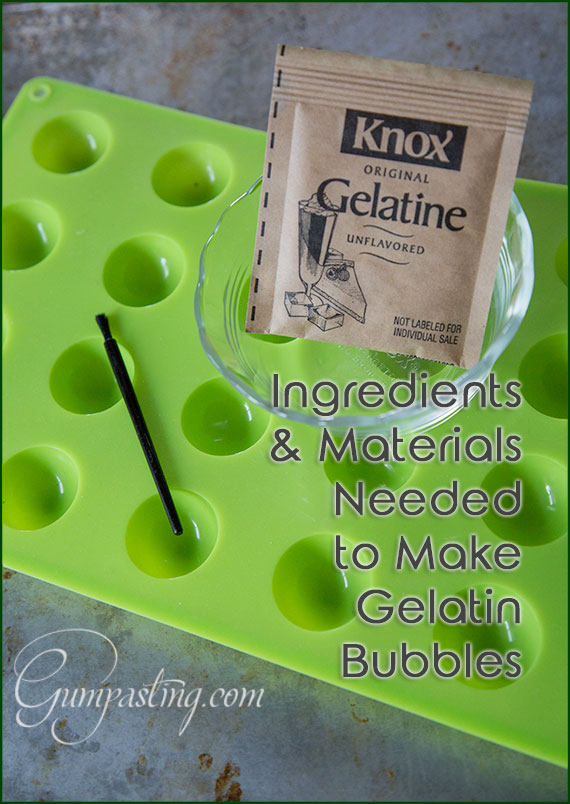 You will need the following items:
Gelatin (I used Knox)
Water (not shown)
Small Whisk (not shown)
Heat-proof Bowl or Measuring Cup
Disposable Brush (I used a lipstick applicator)
Silicone Candy Mold with Half Circles (makes 1” half circles)

I didn’t use a toothpick to apply the gelatin this time as I did with the dragonfly wings. Instead, I used one of my handy-dandy little 3 ¼” disposable lipstick applicators to paint it on and it worked pretty well.

In a heat-proof bowl, make a mixture of 1 tablespoon Knox powdered gelatin combined with 2 tablespoons of cold water (i.e. 1 part gelatin to 2 parts water). Stir it together then allow it to sit until it becomes a semi-firm, spongy texture. Place the gelatin into the microwave and zap it for only a few seconds. The time will vary depending on the strength of your microwave. The idea is to slowly melt the gelatin until it reaches a liquid-gel consistency. You may need to zap it a few times, so a little trial and error may come into play to get you there. Each time you take it out gently “swirl” the warmed gelatin in the bowl instead of stirring it. This will help eliminate air bubbles from forming. Do not let it “boil” because this will also create unwanted air bubbles in your gelatin. Use a toothpick to skim off any residual gunk that may have formed on the surface.

Once it is melted carefully paint it onto the entire inside surface of the cup of the silicone mold. I confess, I was never able to completely cover every millimeter of its surface because invariably I would miss a very tiny spot or two. This is because you have to paint really fast before it starts to set. Unfortunately, if you miss a spot then try to repaint paint over it leaves ugly streak marks. Once the inside of cup is coated paint a small amount of gelatin just slightly over and around the outer edge (see photo below). This gelatin “lip” is very important because it aides in you being able to peel it out of the cup without it tearing as well as giving the bubble some extra stability. 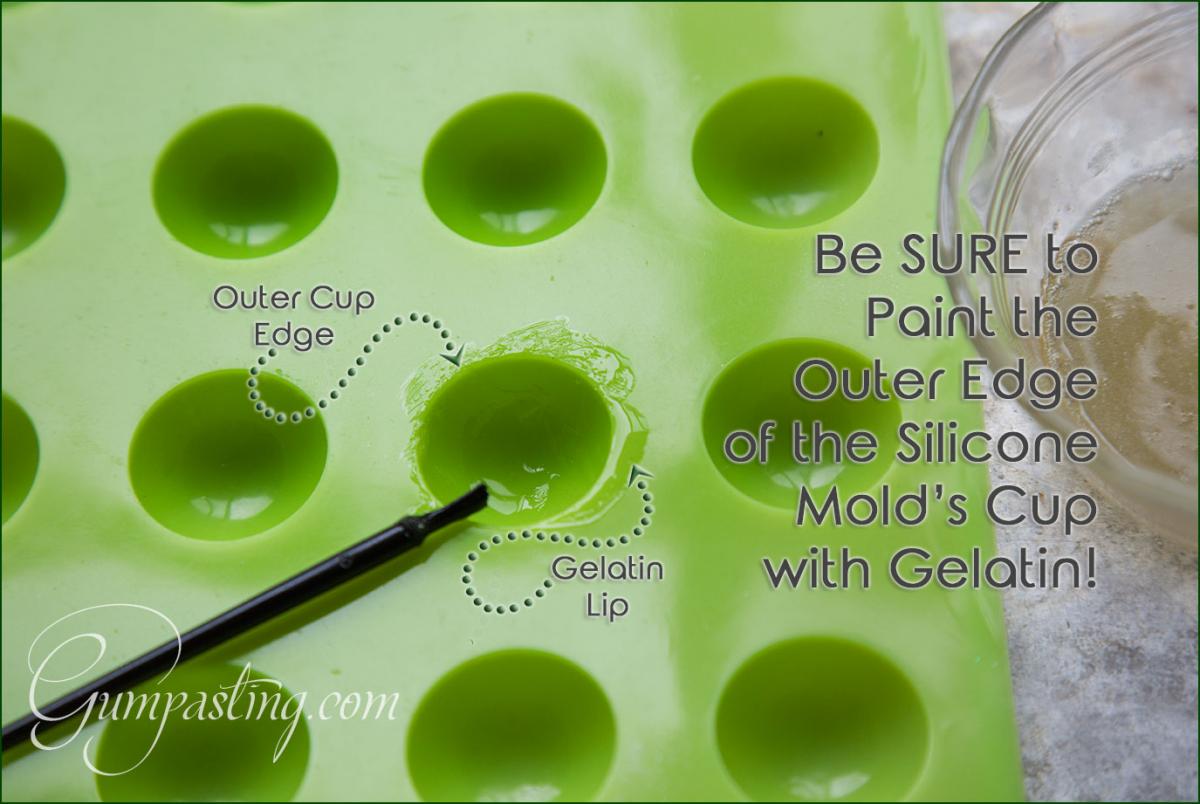 Let it/them dry overnight! If you’re not patient like I was the first time and attempt to take it out before it dries completely it will come out deformed (see photo below) :C! The good news is that once they dry completely they are fairly strong (depending) how thick you’ve painted on the gelatin in the first place. Just remember though, the thinner the original coating is the more realistic the bubble will appear when it is finished! If after it has dried completely and you are not quite sure you like the look of the lip you can simply cut it off with a pair small scissors. The downside is you may then find it harder to attach it to your cake. 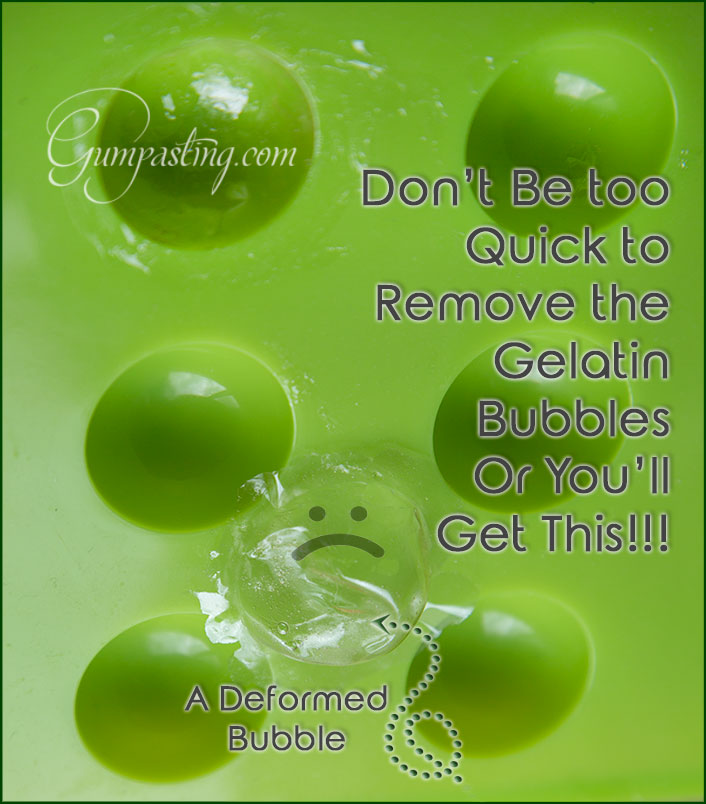 I did get better with practice, but no matter how careful I thought I was I continued to produce some duds, i.e. ones with mysterious large holes or ones I managed to tear as I removed them. I think I had about a 50/50 ratio of duds to decent ones. The silicone mat I used allowed me to make 26 at one time if I was so inclined (Not!). That means even if half of them were duds, I would still have 13 to work with after one batch. I hate to burst your bubble (tee-hee), but the bottom line is you will need to make more in the beginning than you think you will need for your final project.

FYI: These bubbles can be made ahead of time and stored indefinitely in a container until you need to use them. So why not make some today because who knows when you might want to have some cute little ocean bubbles on your cake? 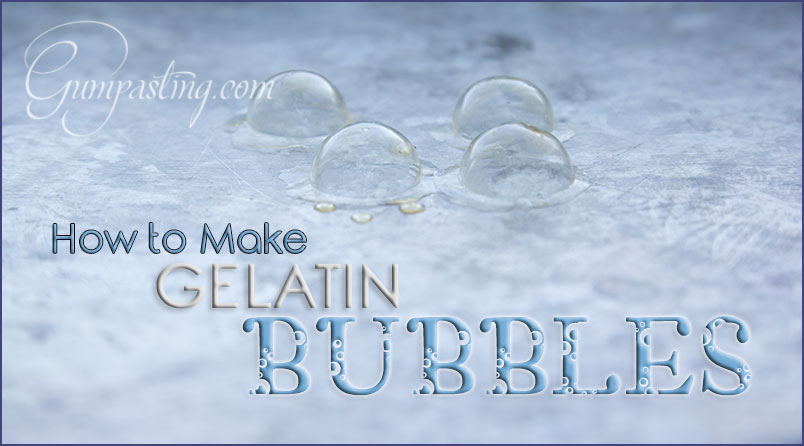